TACOMA, Wash. – They’ve got their legs under them now. Growing more sturdy by the day. And venturing out a bit, even learning how to climb the steps into their root cellar den.

Now, the eight endangered red wolf pups born May 10 at Point Defiance Zoo & Aquarium are ready for their names. 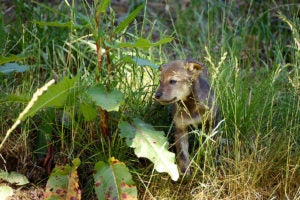 So, dut-ta-da-da, without further ado, the envelope, please! The puppies’ new names: Chester, Cypress and Hawthorn for the three boys; Camellia, Magnolia, Myrtle, Peat and Willow for the five girls.

Members of the public overwhelmingly picked the slate of flower, plant and tree names for the puppies. The list of flora was compiled by the zoo’s red wolf keeper staff from among flowers, plants and trees from the wolves’ native range in North Carolina.

They won the day over a slate of place names from Hyde County, N.C.: Buxton, Bogs, Macley, Widgen, Carmur, Slade, Ponser and Mackay. More than 4,500 people participated in the voting.

The newly named pups all looked healthy during an exam by Point Defiance Zoo & Aquarium Associate Veterinarian Dr. Kadie Anderson on Tuesday. The eight pups weigh between 3 and 4 pounds.

“They’re growing fast, and they all appear to be healthy,” Anderson said. “It’s a joy to have them at Point Defiance Zoo and to watch them grow. They are the future of their species.”

Zoo staff biologists talk about the red wolf family during their daily 2 p.m. keeper chats. And if guests are fortunate, the pups and mom Charlotte will make an appearance. Whether – and how far – they venture out into their habitat is all up to them, though. Puppy sightings aren’t guaranteed.

“We’ve seem more activity from them over the last week or so,” said Jenn Donovan, the senior staff biologist in the Kids’ Zone/Red Wolf Woods area of the zoo. “Charlotte is being a fantastic mother. She’s been nursing and bonding with them.

“As they become more mobile and independent, she’ll spend less time with them, but will continue to keep a watchful eye on her eight pups,” Donovan added.

North American red wolves are critically endangered, with only about 40 in the wild and just over 250 in zoos and wildlife centers across the nation.

The pups are part of a cooperative effort that helped bring these iconic American animals back from the brink of extinction four decades ago. Point Defiance Zoo has been at the forefront of the program, and these eight pups represent another success in the survival of the red wolf species.

For more information about red wolves and red wolf conservation, go to www.pdza.org//animals/red-wolf-woods.

To make a tax-deductible donation on behalf of red wolves, go to www.thezoosociety.org/support-red-wolves.

Point Defiance Zoo & Aquarium, the Northwest’s only combined zoo and aquarium, practices and promotes responsible stewardship of the world’s resources. A member of the Metro Parks Tacoma family, the zoo creates a legacy of sustainability for future generations through education, conservation, research and recreational opportunities; it also embodies Metro Parks’ mission of creating healthy opportunities to play, learn and grow. The zoo is accredited by the Association of Zoos & Aquariums (AZA) and the Alliance of Marine Mammal Parks and Aquariums (AMMPA). The Zoo Society, a 501(c)(3) organization, is an instrumental partner in Point Defiance Zoo & Aquarium’s conservation, animal-welfare and education initiatives.