Can you spot our clouded leopards? It can be tricky – they’re shy, nocturnal and excellently camouflaged!

A clouded leopard cub named Rakhan (pronounced Rah-kaan) arrived at Point Defiance Zoo & Aquarium in 2021. The cub joined the zoo on a breeding recommendation through the Species Survival Plan®.

“He is very playful and loves to explore his new home,” said curator Telena Welsh. “He enjoys jumping, climbing and doing zoomies until he’s tired and needs a nap.” 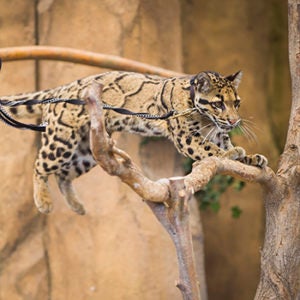 Orchid and Banyan are sister and brother, born here at the Zoo on May 12, 2015. They live together and get along really well. Orchid is smaller and a little shyer, says assistant curator Maureen O’Keefe, but when she walks onto the Wild Wonders stage you would never know – she’s a pro at the climbing, balancing and leaping that show off a clouded leopard’s natural wild abilities.

Orchid is great at a couple of other behaviors, say staff, like coming when her bell is rung or sitting with all four feet on a perch to allow keepers to put a leash on her for the show.

But one of her favorite places is up high on the highest platform in her outdoor yard – around 12 feet high – to survey her territory. 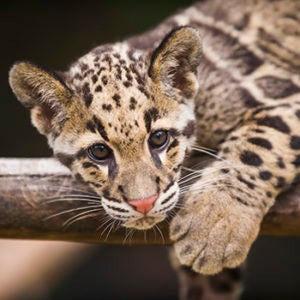 Banyan and Orchid are brother and sister, born here at the Zoo on May 12, 2015. They live together and get along really well. Banyan is around 20 pounds heavier than his sister, and is super-talkative, says assistant curator Maureen O’Keefe.

“He chuffs and whines a lot as we come by,” she says. Since he was hand-raised, he also loves getting scratched behind his ears – a cat favorite.

Like Orchid, Banyan is great at the climbing, balancing and leaping he does in the Wild Wonders show that display a clouded leopard’s natural wild abilities. He’s also good at allowing staff to take a blood sample – really important for keeping animals healthy. 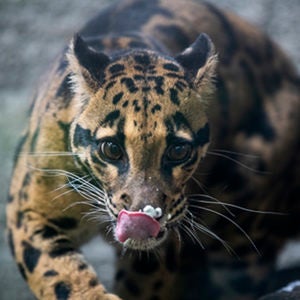 “She carries green stuff from the outdoor habitat back to her resting room and decorates it,” says Smith. 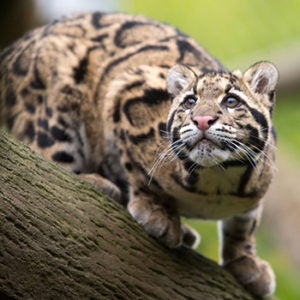 “She doesn’t seem like a typical cloudie,” says assistant curator Shannon Smith. “When she gets excited she runs all over the place.”

Her climbing ability is also pretty unusual, says Smith. All clouded leopards are excellent at this skill, using their long tail for balance and even hanging upside down. But Sang Dao can do it even when there seemingly aren’t any handholds – like an indoor skylight.

“She’s like Spider Man,” Smith says. “And she just loves attention, too.”

THE THREAT: Clouded leopards are endangered. Their tropical forests are being cut down at the world’s fastest deforestation rate (around 1.2% yearly) for logging, human habitat and to grow palm oil, a common food product.

TAKE ACTION: Check products you use for sustainable palm oil, and encourage companies to make the switch. Send a letter, email or tweet, and download a Palm Oil Shopping App.

YEAR OF THE TIGER

It’s one of the fastest-growing plants in the world. It’s used for buildings, dishes, musical instruments. It’s food for animals and people. And there are over 45 types at Point … Continued

Read More
Read the blog
Who's Nearby?
Visiting our clouded leopards? Then you’re super-close to our Asian elephant! Meet Suki and chat with her keepers at daily presentations.
Find an elephant