It’s a chilly spring morning at Point Defiance Zoo & Aquarium, but Shana Osmer doesn’t let that faze her. Entering the Pacific Seas Aquarium through a staff door, she carefully carries what looks like a large insulated pizza box down to the Baja Bay habitat, and sets out a foldable play pool, to the delighted curiosity of several young guests. Then – after chatting about the special animal they’re about to see, who likes to stay warm and is just as curious as they are – Shana reaches into the box and gently lifts out one of her favorite Zoo animals: Monty the ball python.

And even after 15 years and 3,595 hours of Zoo volunteering, the sheer joy of getting up close with animals never wears off.

“This is one of the most thrilling experiences a volunteer can have,” Shana says, beaming.

From People to Animals

Shana didn’t start out her Zoo service handling animals, though – she actually had a degree and career in social work. After years of moving toward a more administrative role, she felt she was spending less and less time with families, and making less of a difference in their lives. She started looking for other ways to help and connect.

“I’d always been very happy around animals,” Shana explains, “so in 2006 I started volunteering at Point Defiance Zoo, as well as Wolf Haven and the Humane Society. I thought between the three of them I’d find my home.”

Shana ended up on staff at the Humane Society for eight years, but continued volunteering at Point Defiance Zoo. Beginning in conservation engagement, she moved to the Wild Wonders Outdoor Theater in 2010, learning how to share the Zoo’s ambassador animals with guests. Finally, she left the Humane Society and devoted her free time to the Zoo.

“This is where I really felt like I could give back,” she says.

But before leaving the Humane Society, she made one strong connection that tied her to both places: Herald, the Zoo’s beloved dog and long-time star of the Wild Wonders show, who was adopted from the Humane Society.

“It was so wonderful seeing him here again!” Shana remembers. “I cared for him at the Humane Society and he still remembered me.”

Now, Shana’s day usually begins with taking Herald for his daily walk around the Zoo, after she checks in with Wild Wonders staff on what’s needed that day. Herald loves visiting various staff and habitat areas, and always knows which offices have the best-smelling lunches or vet-approved treats.

“That’s my favorite part of volunteering here,” Shana confesses. “That, and whichever animal I’m working with at the time.”

Shana’s next few hours are spent behind the scenes in the Wild Wonders enrichment storage room, creating new enrichments for the many animals there from food to sensory, behavioral or environmental.

“It could be a new food the parrot hasn’t tried yet, or a puzzle feeder,” she says. “I’ve learned so much doing this, and it’s given me a lot of ideas to make enrichments for my own pets at home.”

Ironically, during the pandemic, Shana also created enrichment for humans. After volunteers were allowed to return following pandemic closures in 2020, she doubled her volunteer days and began a weekly Facebook “Zoo Treasures” post to connect other volunteers who couldn’t come in person.

“Shana is so dependable, always greeting us cheerfully and ensuring that our animals got plenty of exercise and enrichment during our pandemic closures,” says Maureen O’Keefe, assistant curator at Wild Wonders. “In a time when so many things seem uncertain and unsteady, Shana is a rock we know we can count on.” The biggest part of Shana’s afternoon, though, are the Animal Encounters – meet-and-greet sessions where volunteers or staff bring birds, reptiles, mammals and even insects out to meet their (mostly) adoring public.

“I do them rain or shine,” Shana says. “But of course, it depends on the animal and the weather. Sometimes we go inside the Pacific Seas Aquarium, if it’s too cold out.”

Handling Zoo animals takes training, and Shana’s done a lot of it over her 15 years. First comes learning all the natural history information about the species, and the personality and history of each individual animal. Then comes hands-on training (starting with smaller animals like millipedes), watching staff as they give an Encounter with each animal, and practicing facts and FAQs until they come fluently.

“I’m lucky enough to take out many of our gorgeous birds, like the eagle owl, burrowing owl and American kestrel,” explains Shana. “Sometimes it’s the opossum or hedgehog, or helping with the beavers or aardvark. But I’m most proud of how I’ve come to love our snakes. I was never terrified, but now I adore them.” 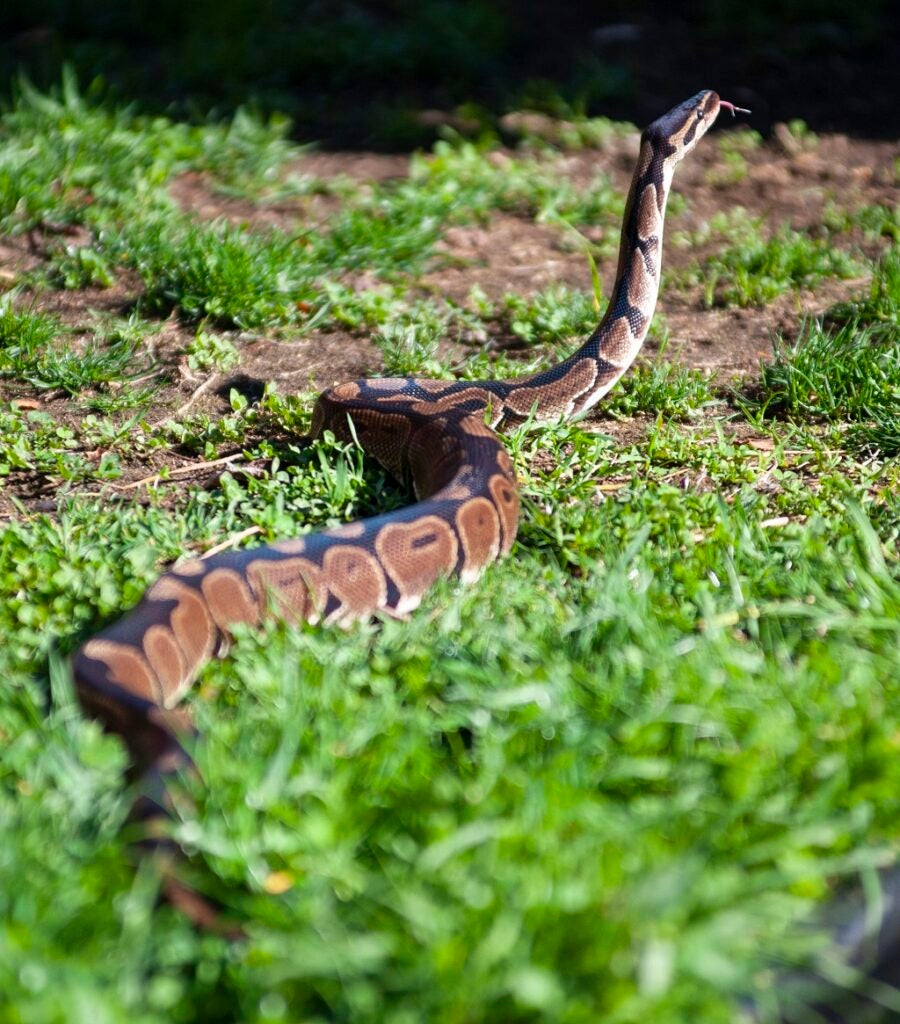 Monty the python (get it?) is one of her favorites. Shana’s made it her mission to help people feel more comfortable about snakes, and at today’s Animal Encounter she starts even before revealing who he is. Cleverly, she preps her Baja Bay audience by talking about Monty’s needs, wants and personality, helping everyone relate with their own.

So by the time Shana lifts his smooth, muscular, three-foot-long body out into the play pool, everyone’s feeling empathetic. As Monty arcs and slides with slow grace, Shana keeps talking: ball pythons aren’t venomous (or poisonous either); instead, they dispatch prey with a firm hug, keeping rodent populations at healthy levels. They’re native to warm regions of Africa, and that’s why she’s also brought a cozy warmer plate for him to snuggle on.  He tastes the air with his tongue, and doesn’t feel safe when strangers touch him – just like most of us. Kids and parents all nod in agreement with this, and before long Monty has a crowd of admiring fans keeping a respectful distance and peppering Shana with questions.

“For the most part, people come to see that when we’re gentle, snakes are gentle too,” says Shana. “It’s really neat to see that transition, especially in kids.”

But whether she’s walking Herald, holding a millipede or making enrichments, Shana’s doing something that protects animals, connects people and makes her incredibly happy.

“This is such a special way to spend my time,” Shana says. “The staff are wonderful, and we have so many amazing volunteers here at the Zoo. But to hold these animals, earn their trust and help people connect with them – I can’t believe I get to do this.”

VOLUNTEER: Come volunteer at the Zoo! Discover opportunities for adults and teens in a variety of areas.