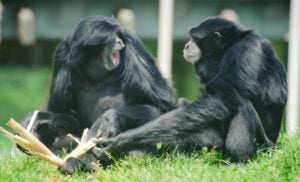 It started with a low whoop at middle C. Then another.

Then some higher hoots, descending to meet the whoop in a unison.

The whoop and the hoots repeated, faster and faster, a rainforest percussion.

A brief silence hung, like a poised raindrop. Then it began again – and from across the path came an eerie vibrating woooooooo, like an operatic ghost.

The siamangs were singing at Point Defiance Zoo & Aquarium, and the lar gibbons were joining in.

“All gibbons can make amazingly loud sounds, and our siamangs Cho Cho and Dudlee have always sung, mostly in the morning,” explains Telena Welsh, curator of Asian animals. “Since our new lar gibbon brothers Orion and Aries arrived, they’ve sung a lot too – especially Orion.”

To the humans watching and listening, it’s entrancing. While Cho Cho and Dudlee hung out in their hammock area, throat sacs swelling like balloons and mouths in a round O, Orion and Aries swung high in their ropes with athletic prowess, Orion’s high-pitched vibrato quivering in the air.

But to these primates, it’s not just exhilarating music. It’s a song of territorial boundaries, of identity – and yes, maybe love.

“Aries and Orion sing two to three times a day, and at least once in the morning,” said keeper Steven OK. “We’ve heard them sing for up to 30 minutes!”

The lar gibbon brothers recently arrived at the Zoo, so a song expressing their identities and confirming their new territory would make sense. (Orion at 7 is the older; Aries is 4.)

For Cho Cho and Dudlee, however, there’s an extra reason to sing. Siamang pairs stay together for life (one of the few primate species to do so, including humans) and these two have been together for years. Cho Cho is nearly 54, and he’s slowing down a little. Dudlee, at 26, is energetic and good at expressing herself.

Singing to each other, creating their own unique duet, is something siamangs do often in the wild, with a loud call that can be heard several miles away. Pairs often adapt their song to each other, and songs can also be used to attract mates.

Gibbons also sing in response to alarming stimuli – the Zoo’s siamangs often start up after hearing local sirens – and in response to neighboring animal groups.

To produce that astonishingly loud, operatic tone, both primates use a throat sac, which visibly fills up with air and amplifies their song like a sound box. As Cho Cho and Dudlee sang, one took a lower “booming” tone – swooping up in a series of whoops from middle C to E-flat, right in the middle of average human female vocal range. The other cascaded down from a high G to the upper E-flat, with the tones meeting at the octave. And they stayed on pitch, all the way through.

The lar gibbons, meanwhile, took a higher road – much higher. Orion’s piercing calls hovered around a high B-flat, right at the upper end of opera soprano range. Vibrating intensely, they descended down through chromatic half-tones, sounding eerily like a theremin in a 1970s pop song, or a ghost in a horror movie.

Of all animal vocalizations, gibbon song is maybe the most like human tone and pitch. As far back as the 4th century it appears in Chinese poetry, moving travelers to tears, and contemporary research shows that of all mammals, it is gibbons that most produce an emotional response in humans.

And of course, humans are primates too, who have evolved their own singing. Like gibbons, we sing territorial (aka patriotic or national) songs, songs to express who we are, and – of course – love songs.

Some of us also like swinging on things, which makes watching an opera in the ropes all the more interesting.

The biggest differences in human music, points out researcher Thomas Geissmann, are the emphasis on a steady beat and the ability to improvise and learn new songs. Evolutionarily speaking, the ability to keep a beat is obviously better for group singing to present a united front and survive as a species. And the ability to make up new songs might help attract mates (it certainly works in pop music).

But humans and gibbons have one big musical thing in common: We use songs to define ourselves. So if you’re at the Zoo and are lucky enough to hear the siamang-gibbon opera, don’t worry if you’re tempted to sing along. It’s a natural instinct.