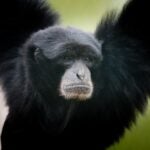 Cho Cho, born in 1967 and believed to be the oldest siamang in human care in the United States and possibly the world, was humanely euthanized at Point Defiance Zoo & Aquarium on Tuesday after a rapid decline in his health.

The zoo’s head veterinarian, Dr. Karen Wolf, said Cho Cho’s quality of life deteriorated quickly over the past week and staff made the difficult decision to humanely euthanize him.

“Cho Cho was having difficulty moving around his habitat due to progressive osteoarthritis,” said Dr. Wolf. “He was receiving multiple pain medications to ease his discomfort and his keepers had modified his habitat to make it easier for him to move around. Despite these efforts, Cho Cho continued to decline.”

Cho Cho was almost toothless, a normal thing for siamangs his age, so keepers either cooked or sliced his food very thinly. And, of course, he received regular senior wellness checkups from the zoo’s veterinary team. 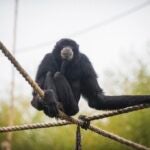 Results of his necropsy, or animal autopsy, are pending but are anticipated to show multiple age-related conditions in addition to his extensive arthritis.

At 55, Cho Cho lived many years past the median life expectancy of 27 years for siamangs in human care, according to statistics from the Association of Zoos and Aquariums. His senior age didn’t stop him from swinging around his ropes and hanging with his companion, Dudlee.

“He was a very clever ape and will be sorely missed,” said Assistant Curator Erin Carey. “He was always observing everything around him and would even notice any new freckles on his keepers.”

Cho Cho voluntarily participated in his own healthcare, stepping on a scale when needed and opening his mouth for regular dental checks, said Carey. “He loved chicken and peanut butter, but had a sweet tooth, too. He would never turn down an orange or kiwi.”

His favorite enrichment items were snow, mops, blankets, and grapes hidden inside a puzzle feeder. On a sunny day, he would almost always be found sunbathing.

Cho Cho was a fantastic partner to Dudlee and they were closely bonded, Carey said. “He would groom her often and was attentive, respectful and protective,” said Carey.

Anyone who has visited Point Defiance Park around 8 am will have heard Cho Cho and Dudlee loud and clear – the unmistakable hoots and calls of siamangs. Siamang pairs have unique songs, and individuals have their separate parts. In the wild, they would likely use their songs to mark their territory and define family units.

“Dudlee is getting lots of extra love and attention from her keepers, including more training sessions and enrichment items,” said Carey. “We will be watching her closely over the coming months.”

Siamangs are the largest species of gibbon in the primate family. They’re found in the wild living in the treetops of tropical rainforests in Sumatra and on the Malay Peninsula. Endangered in the wild, siamangs are losing their habitat to human logging and agriculture. Much of southeast Asia’s rainforest destruction is to make room for palm oil plantations. You can help siamangs in the wild by checking the products you use for sustainable palm oil, and encouraging companies to make the switch.