You could say the double bass is the walrus of the music world.

Large, bottom-heavy, ungainly and prone to awkward blurting noises, it doesn’t win any beauty contests. It doesn’t star in glossy movies, and often gets laughs rather than admiration.

But, like actual walruses, it’s also capable of a powerful grace – and a huge variety of grunts, whistles, knocks and bell-like notes. So when I got the chance to play my double bass to Mitik and Pakak, Pacific walruses at Point Defiance Zoo & Aquarium, I rosined my bow and started making walrus music.

At the Zoo I’m primarily a writer in our marketing department – I run our websites and write blog stories like this one. But I’m also a classically-trained musician and have, in the last few years, developed a unique voice improvising on double bass using a looping pedal to create my own harmonies. I especially love taking this music outside, incorporating natural sounds like whalesong and birdsong – recently, even wolf howls at our sister zoo, Northwest Trek Wildlife Park.

So as I wheeled my bass down the paths to the Rocky Shores habitat, I was super-excited. Most Zoo visitors know first-hand that male walruses can make a lot of noise: piercing steam-train whistles, reverberating grunts. I’d learned it was a common breeding behavior to attract the ladies. But researching some more, I found out some astonishing things.

Walruses in the wild can sing non-stop for days at a time, their vocalizations audible 10 miles away and of incredible complexity. A 2003 study identified no less than four discrete songs in Atlantic walruses, including the “coda song,” the “intermediate song” and the “diving vocalization song.” Females can sing too, given the right encouragement, and both can change their song depending on feedback. In one study, a male walrus even figured out how to use a rubber toy as a musical instrument in the pool – and his pool-mate learned to play it too.

In other words, walruses are the humpback whales of the pinniped world, with the added ability to make noise above the water as well. I even discovered that a recent study done on walruses right here at Point Defiance Zoo showed that walruses can hear above water at frequencies from 60hZ upwards – around double bass pitch.

But would they actually hear my double bass through the glass windows as I played looping harmonies in the Rocky Shores underwater viewing area? And would they bother to respond?

After getting some guidance from keeper Caryn Carter on what to look for in our walruses’ response, I set up my bass and tuned. Mitik and Pakak were already cruising over to the window – they love seeing visitors. As I played the first few low pizzicato notes, a large, bulbous face came right beside me, staring. Bit by bit I added layers of loop to a slow, gliding waltz that I composed to conjure those slow, gracefully swimming bodies. Accustomed for over 20 years to feeling huge and ungraceful with a double bass, I suddenly felt exactly right, a massive instrument producing a uniquely beautiful result – just like them.

Even our names are similar: Odobenus rosmarus meets Rosemary.

I layered more harmonies and started improvising a melody. Suddenly Mitik rose to the surface and blew out a high descending whistle. I imitated him high up on the fingerboard with an airy downward slide. He whistled again. I slid again. Nearby the puffins and murres started chattering – they’d picked up my higher frequencies, so I twittered back with some bow tremolo (fast back-and-forth). 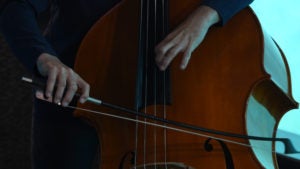 Suddenly – SLAP! I spun my head. Pakak was right there and smacking the window with a flipper. He did it again, clearly trying to get my attention. I grinned, and slapped my bow down on the strings to echo. (I would never dream of banging the glass back, which could be very disturbing for them.)

“Having live music is definitely enriching for them,” said Caryn Carter, later. “Sometimes we play recorded music to them, or even videos, and they really get a lot out of the experience.”

“Living in human care, animals are generally only exposed to a set environment of sounds,” explained curator Malia Somerville. “Adding a diversity of sounds can be very enriching.”

On and on we waltzed, bow slaps and flipper slaps, whistles and slides, and some low farty walrus burbles on my lower strings, as the swirling harmonies echoed the beautiful, enormous brown bodies that turned and circled and dived in the water beside me.

Finally, I faded out and stared into Pakak’s eyes. If this was a wooing moment, I was definitely wooed. I packed up my bass and Pakak slowly swam away. 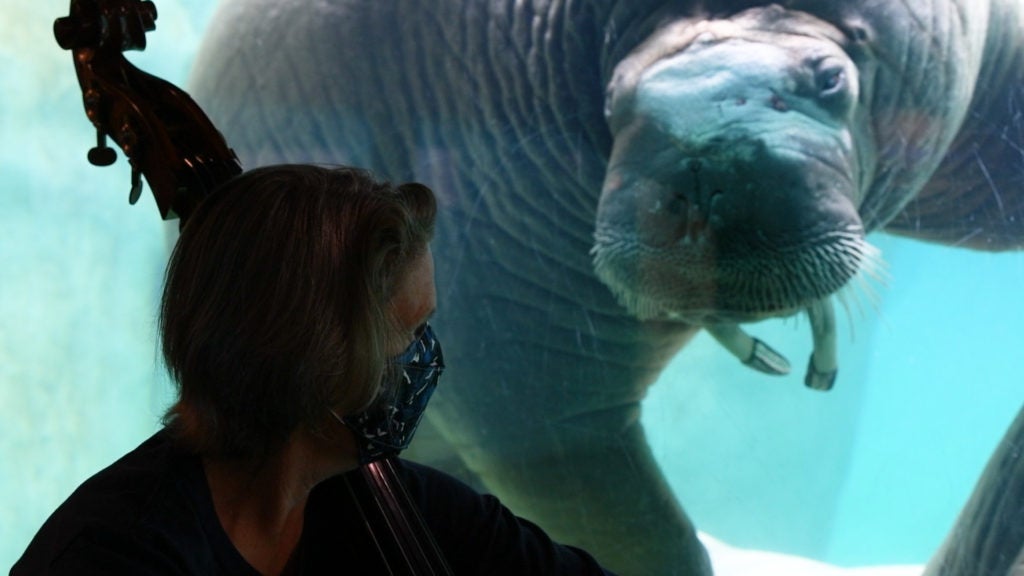