Here’s your sneak peek on who’s new in the aquarium. 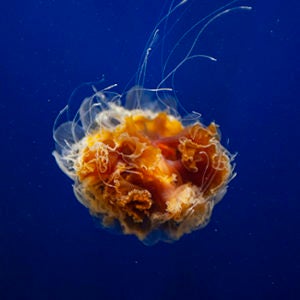 Lion’s mane jellies are beautiful – but they also have a painful sting. They live in Pacific waters from the Arctic to Washington, including Puget Sound.

We just added a whopping 980 lion’s mane jellies, but you won’t see them all right away in the Jelly Gallery. Most are behind-the-scenes in their polyp stage: tiny, and still attached to a fixed object (in the wild, that’s often a reef). From there they grow into the medusa stage: looking more like a jellyfish, floating freely and able to reproduce.

Eventually, they grow into the largest jellyfish in the ocean, drifting with currents and even sheltering young crabs and fish from predators in their tentacles. 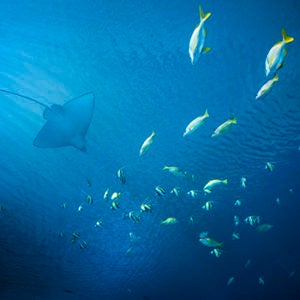 Zanclus comutus
Also known as Gill from “Finding Nemo,” Moorish idols are a spectacular fish with yellow and black stripes running vertically along their thin, disc-like bodies. Their dorsal fin is elongated into a trailing, whip-like extension.

Moorish idols are reef fish, living in warm waters throughout the Indian Ocean, Pacific Ocean and the Red Sea. They love to school, foraging for corals, sponges and other invertebrates – watch for our 67 idols in Baja Bay.

Acanthurus triostegus
Our 97 convict tangs arrived in Baja Bay at the same time as our Moorish idols, and share a similar palette: lemon yellow with black vertical stripes.

But tangs, a small type of surgeonfish, have far longer bodies, without the trailing dorsal extension of the idols.

Tangs are widespread in warm waters, from the Indo-Pacific to Hawaii and down to Panama. 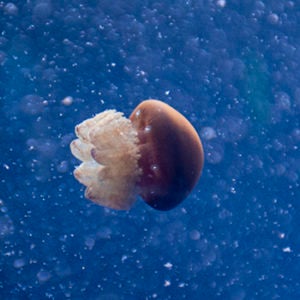 Catostylus mosaicus
This compact tropical jelly lives in bays around Australia and Southeast Asia. It has no tentacles! Instead, stinging cells line its frilly mouth-arms.

These jellies are edible—once they’ve been properly processed. Treating them with a salt mixture yields a surprisingly crunchy texture. People have been enjoying this delicacy in Asia for more than 1000 years.

Our 70 blubber jellies are on view now in the Jelly Gallery. 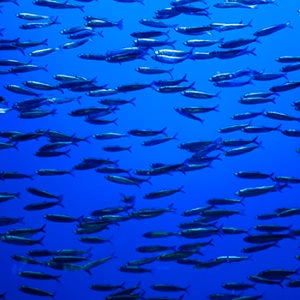 Silvery, swimming, streaming – 2,200 Pacific herring all going in the same direction make for an amazing sight. Find ours near the entrance to the Pacific Seas Aquarium, where they swim constantly in a circular habitat that keeps them schooling – a natural trait for this fish to avoid predators.
Herring are the bread-and-butter of the ocean. Many fish, birds and sea mammals rely on them and their eggs for food. They’re also the inspiration for a sculpture further down in the aquarium: “Shoal,” by Gordon Huether. Dozens of small, cut-metal fish “swim” in a school from the ceiling of the corridor, reflecting both daylight and vibrantly-colored indoor light.