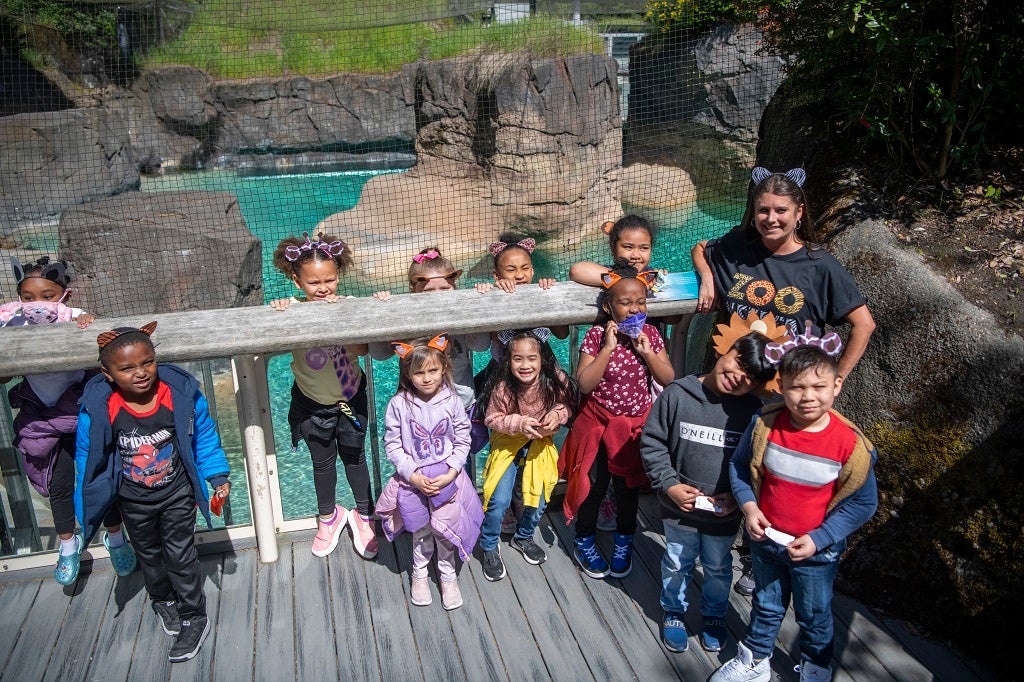 After a spring downpour the day before, teachers, chaperones and the 114 students alike were delighted for a sunny, dry day for a field trip to Point Defiance Zoo & Aquarium. Plus, it was the first visit to the zoo for many of the Tacoma public school students.

“Raise your hand if this is your first time to the zoo!”

Eight of the 12 kindergarteners in Mrs. Pick’s class raised their hands.

“What animal are you most excited to see?”

“The elephant!” said 6-year-old Za’Ray. “The siamangs!” chimed in Jennifer.

“Where should we go first?” asked Mrs. Pick. 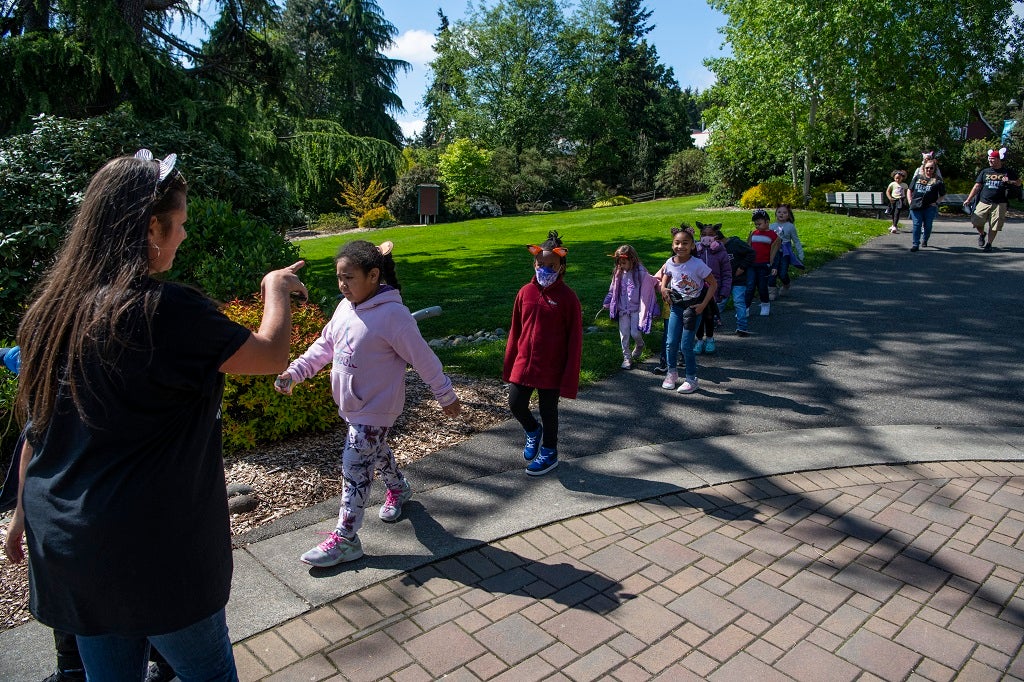 The students agreed: the Pacific Seas Aquarium. Adorned in animal-themed headbands, they walked in a single-file line through the plaza, down the steps and into the aquarium. Awaiting them upon their arrival: a hammerhead shark! 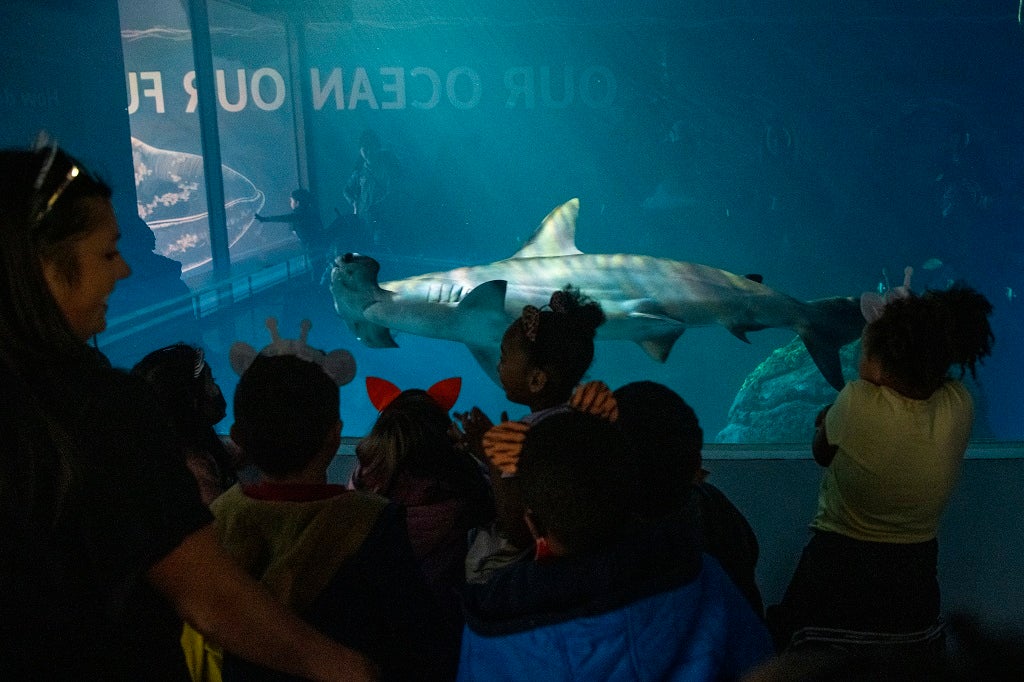 “A shark, a shark!” squealed the kids as they watched it swim by. 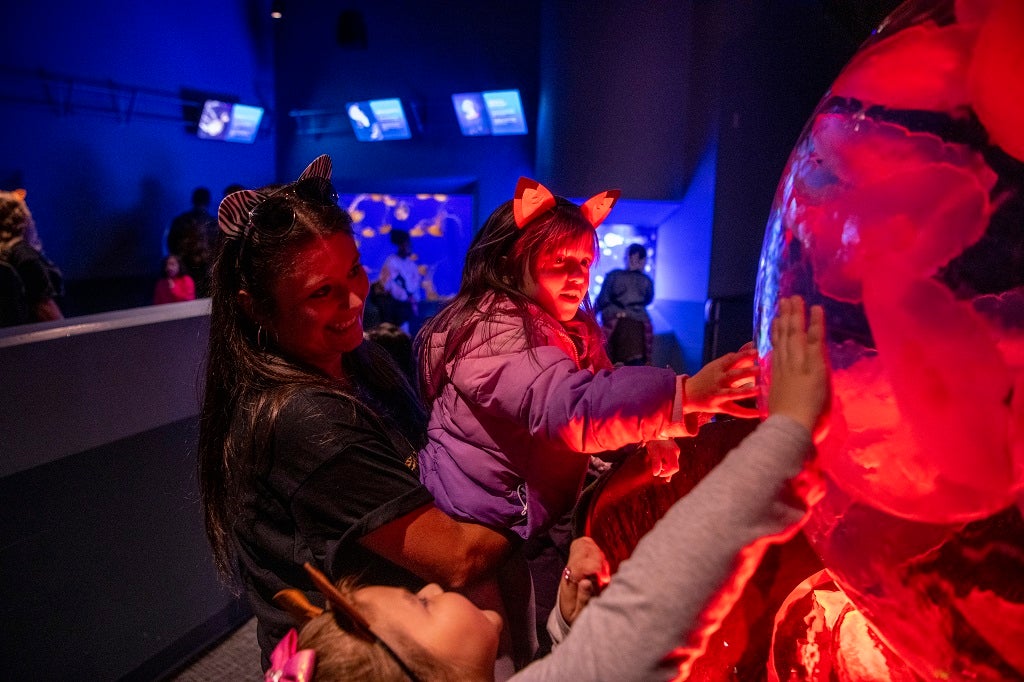 “Look at the jellyfish!” shouted one student to his class. Captivated by the pulsing and drifting colorful creatures, they all surrounded the Jelly Globe in a chorus of “oohs” and “awes.”

They continued through the aquarium and waited in line for their turn at the Tidal Touch Zone. 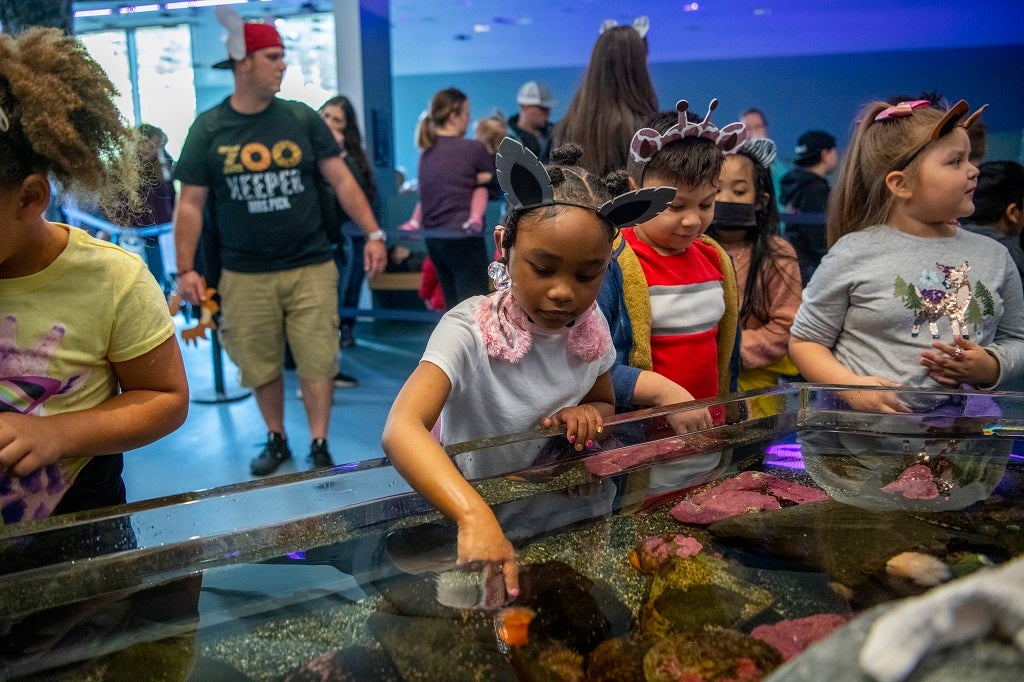 “Only use one gentle finger to touch the sea stars and sea urchins,” explained Mrs. Pick.

After watching her brave classmates, six-year-old Hazelyn hesitantly put her pointer finger in the water and, in return, received an anemone hug. She was all smiles after that. 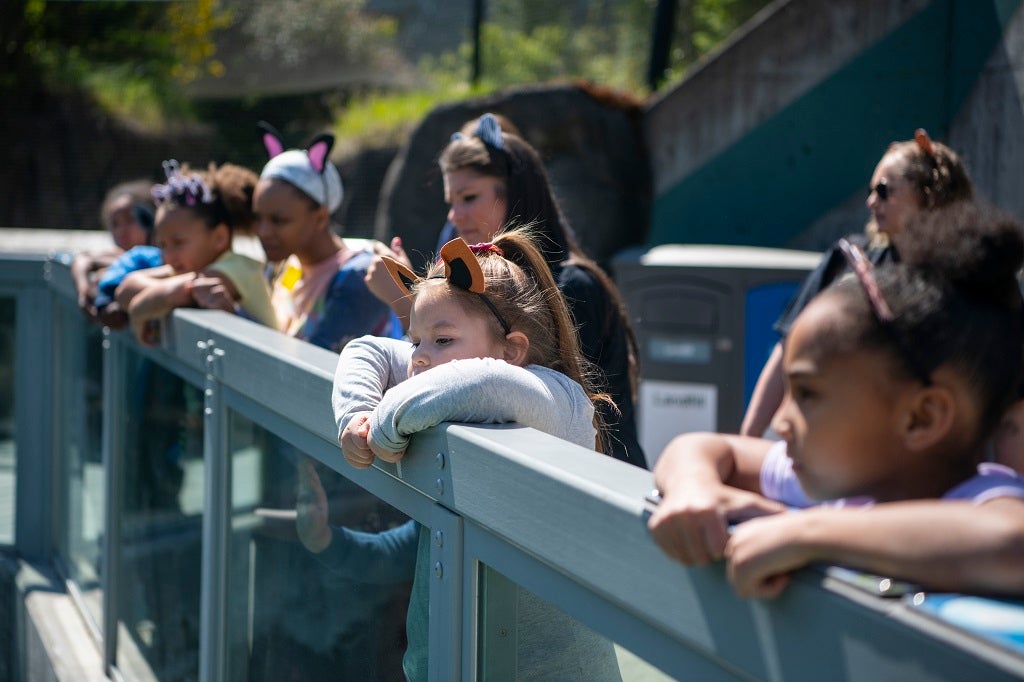 Up next: Rocky Shores. The students watched as the otters used their paws to open clam shells.

“What did we learn about sea otters in class?” asked Mrs. Pick.

“They sleep holding hands and eat a lot of food,” the students answered.

The class passed by Hudson the muskox in the Arctic Tundra area taking a nap in the sunshine before eyeing the red wolves and howling.

Then started the “when is lunch?!” questions to Mrs. Pick. Fortunately, they were right next to the Picnic Pavilion where their lunches were waiting for them. 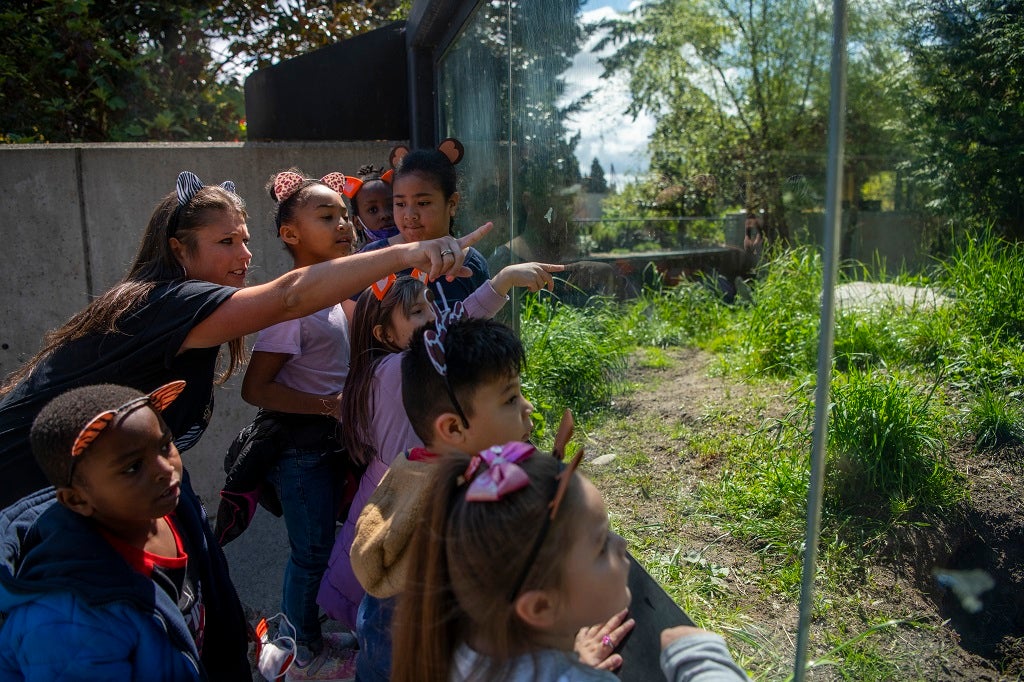 After some crackers and cheese, apple slices and PB&Js, they were off to the Asian Forest Sanctuary where they saw Suki the elephant, tigers, a tapir, and the siamangs.

“Now we want to see birds!” said 5-year-old Simmieon. Good thing that the Budgie Buddies Aviary was next on the itinerary. 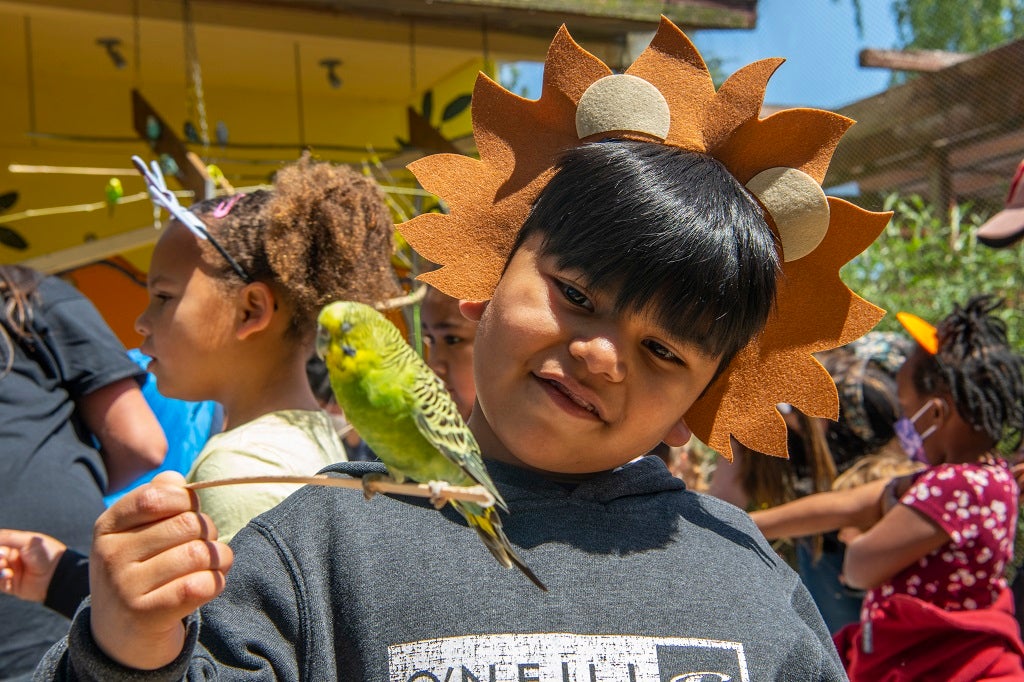 Each student grabbed a seed stick and waited for the budgies to fly down and get their snack.

“There’s a bird on my stick!” Gloria exclaimed nervously. 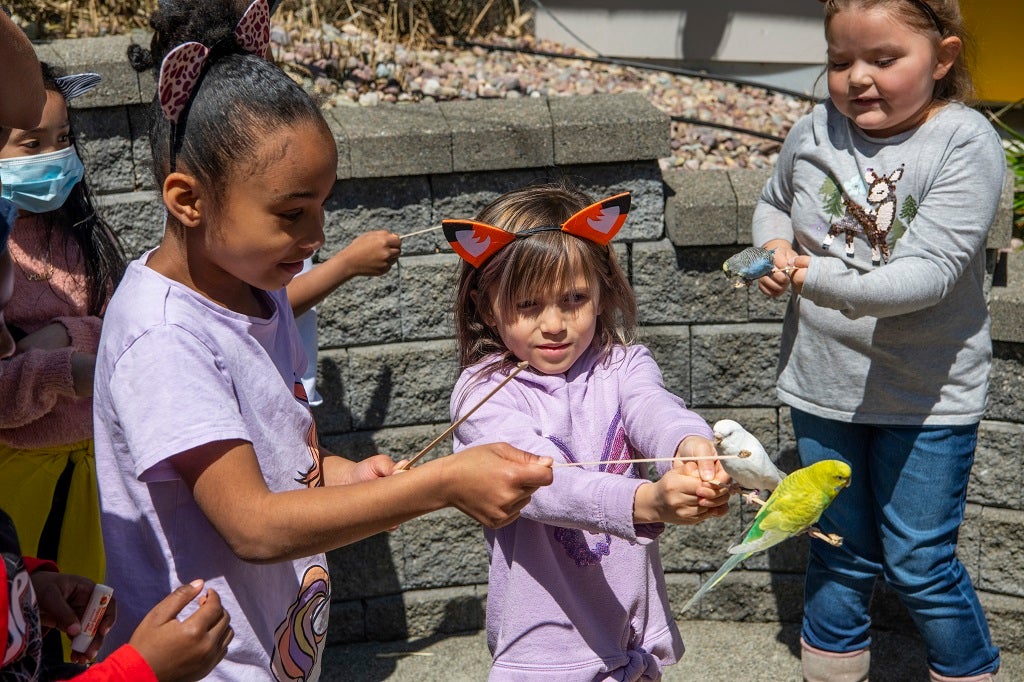 “They’re all friendly,” explained the nearby keepers.

That helped. Gloria smiled and laughed as the birds flew around her.

With only half-an-hour left, the class headed up to Kids’ Zone where they saw snakes, frogs, meerkats, and goats.

No rain and all dry socks, they were headed back to school.

“I can’t wait to tell my mom about today,” said Hazelyn. “She’s going to be so jealous.”

“This has been an incredibly fun and educational day for our school,” said Mrs. Pick. “We are grateful to The Zoo Society for making this possible for our students.”

The students’ school field trip was generously funded through The Zoo Society, which covered the cost of zoo admission and transportation. Now in its 16th year, the school field trip scholarship program has helped nearly 37,000 students from low-income Tacoma elementary schools experience a special day at Point Defiance Zoo & Aquarium. 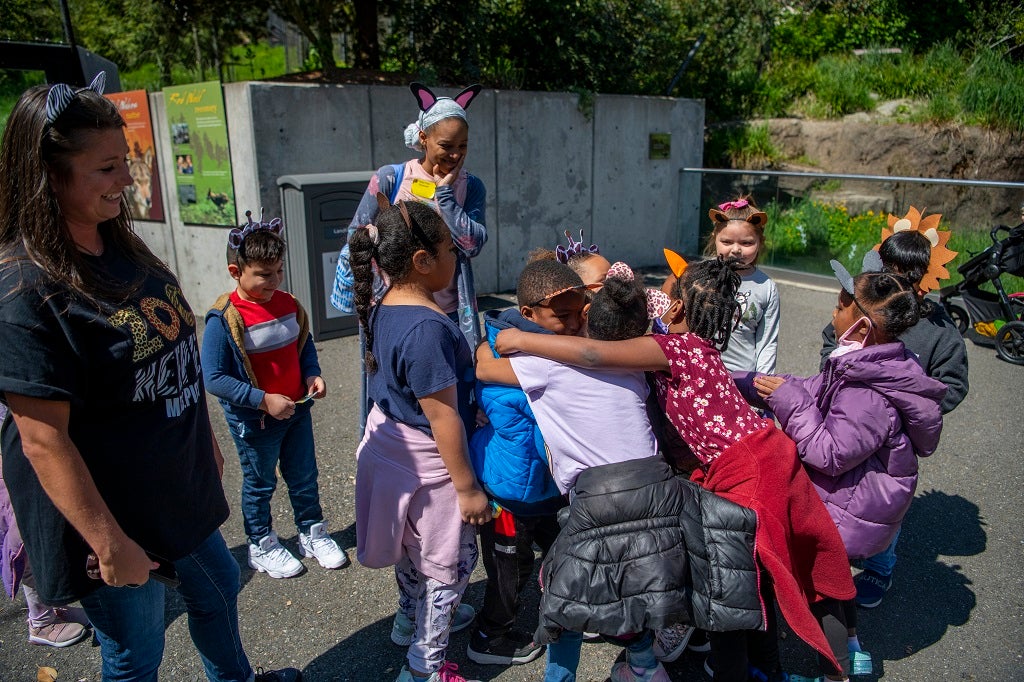