TACOMA, Wash. – “Peep. Peep. Peep.” When Point Defiance Zoo & Aquarium Senior Staff Biologist Marc Duncan heard the small noises coming from the depths of a storm drain at about 4:15 p.m. today, he instantly knew there were ducklings in trouble.

Then he spotted a mama mallard surrounded by eight tiny baby ducks in the nearby grass – and looking around as if she’d lost something.

These were not zoo animals, this ducky family was just passing through, apparently having come on to the zoo grounds from Point Defiance Park.

Duncan realized there must be more of the flock trapped in the storm drain, which sits at the side of a road just inside the zoo’s perimeter. He quickly called in reinforcements. 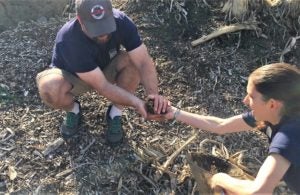 Three other zookeepers and one of the zoo’s maintenance and operations staff members rushed to the rescue. Another stood by on the phone.

Point Defiance Zoo & Aquarium Senior Staff Biologist Marc Duncan and Staff Biologist Suzanne Akerman carefully transfer one of the just-rescued
ducklings before setting it on its way toward mom.

Maintenance technician Paul Sackmann grabbed a long metal stake from the zoo’s operations shop and hurried to the site of the stranded ducklings.

“The cover hadn’t been opened in a while,” Sackmann said. “We whammed it and yanked on it and it finally moved.”

While they worked on the cover, Senior Staff Biologist Maureen O’Keefe and other zoo staff members kept an eye on mama and her brood, trying to corral them a bit so they didn’t get too far away.

Deftly handling a long net, Staff Biologist Suzanne Akerman peered into the drain and saw the tip of a beak emerge from a pipe. She and Duncan tried to get the mother duck to call for her baby. Soon, one duckling emerged from the pipe, and Akerman gingerly scooped it up in the net, carefully removed it and passed it to Duncan, who set it on the ground and pointed it towards mom. The tiny duckling, estimated at no more than a week old, waddled off to join its siblings. Two more ducklings soon emerged from the pipe and the drain in the same way.

In all, the zookeepers rescued three stranded ducklings. And mama mallard and her now group of 11 babies happily wandered off into the bushes. Watch the video here.

“It was a team effort,” Akerman said. “With some patience, we saved all three ducklings.”

After the rescue, they covered the drain so newborns won’t be able to fall through again.

“They were fluffy and seemed to be happy to be reunited with mom and the rest of their family,” Akerman said. “There’s not much cuter than a baby duckling. We were very happy we could help.”

Point Defiance Zoo & Aquarium, the Northwest’s only combined zoo and aquarium, promotes responsible stewardship of the world’s resources through education, conservation, research and recreational opportunities. The zoo, a division of Metro Parks Tacoma, is accredited by the Association of Zoos & Aquariums (AZA) and the Alliance of Marine Mammal Parks and Aquariums (AMMPA).