Hanako the elephant is humanely euthanized 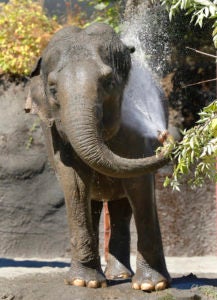 Hanako, a beloved elderly Asian elephant who came to Tacoma two decades ago, was humanely euthanized at Point Defiance Zoo & Aquarium Saturday evening after a severe decline in her health over the past several weeks.

“We have lost a treasured member of our zoo family and beloved icon of our community,” said Dr. Karen Goodrowe, general curator of Point Defiance Zoo & Aquarium. “Our hearts are heavy. Hanako was a magnificent ambassador for her species, and we will greatly miss her.”

Hanako (pronounced HAN-a-co) was diagnosed with cancer in 2018 and tuberculosis in 2019. She also suffered from advanced joint disease. When Hanako stopped eating her regular diet and showed signs of significant discomfort despite pain medication, the zoo veterinary and animal care teams made the difficult decision to euthanize her.

“With Hanako’s advanced age, significant and chronic medical conditions, and severe decline in health, euthanasia was the humane decision,” said Dr. Karen Wolf, the zoo’s head veterinarian. “Through intensive treatments, we were able to slow the progression of Hanako’s cancer and make her comfortable for a long period of time.”

At 56, Hanako was a geriatric Asian elephant who lived far beyond the median life expectancy of 47 for females of her species in human care, according to statistics from the Association of Zoos & Aquariums.

Hanako voluntarily participated in her care, presenting her feet, trunk, mouth and ears to her animal care team so they could inspect them daily. She also stood patiently every day as her keepers washed her feet, trimmed her nails and treated any health issues. This partnership allowed zookeepers and veterinarians to notice subtle changes, identify problems and react swiftly when they occurred.

After keepers and veterinarians noticed abnormalities in Hanako’s left front foot, the cancer diagnosis was made in the spring of 2018. Due to its size, location and invasion of surrounding tissues, the entirety of the cancerous tissue could not safely be removed, Dr. Wolf said.  Zoo veterinary staff and consulting veterinarians aggressively treated it with several forms of topical chemotherapy that target cancer cells; cryotherapy, or freezing of diseased tissue; and photodynamic, or light-based, therapy.

Hanako came to Point Defiance Zoo in 1997 and benefitted from the attentiveness of her experienced elephant care team who tended to her daily needs. In their care, she got plenty of exercise for her mind and body, received enrichments ranging from activities to tasty treats, took joy in giving herself mud baths and splashing in her pool, and voluntarily learned behaviors that aided in her health care.

When it became difficult for Hanako to chew her food, her animal care team mulched her hay. They subsequently found a special blend that was easier to eat so Hanako could get the steady sources of the nutrition she needed. Elephants have six sets of teeth during their lifetimes. When they reach the last one, as Hanako had, the act of eating eventually wears the teeth down, making it difficult for the elephant to chew.

“Our experienced veterinary and animal care teams provided Hanako with compassionate, attentive care every day of the over two decades that Point Defiance Zoo was her home,” said Dr. Goodrowe. “We are all grieving and mourning her loss.”

Point Defiance Zoo & Aquarium is a recognized leader in elephant care and helped pioneer the modern concept of protected contact in which elephants and their keepers never completely share the same space.

Suki, the zoo’s other elderly female Asian elephant, also has thrived under the zoo’s system of protected contact and positive reinforcement. She is 55 and zoo staff plan for her to live out her life in the Asian Forest Sanctuary elephant habitat.

Asian elephants are listed as endangered by the International Union for Conservation of Nature. Their numbers are dwindling due to poaching, habitat loss and other human-animal conflicts.

“Hanako lived a long, full life and inspired millions of our guests to learn more about her species and how to protect elephants in the wild,” Dr. Goodrowe said. “We will continue to celebrate her life and honor her contribution to her species through our support of elephant conservation in Sumatra.”

For details on making a donation to elephant conservation to honor Hanako’s memory, go to www.thezoosociety.org.