TACOMA, Wash. – It’s a boy! An endangered Malayan tapir calf was born at Point Defiance Zoo & Aquarium Friday night, July 12. He is the first tapir calf born at the zoo in its 114-year history. 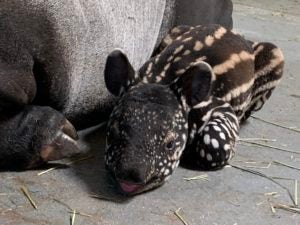 The calf, looking for all the world like a brown striped-and-spotted watermelon instead of a newborn animal, arrived at 11:47 pm.  The calf appears healthy and mom 5-year-old Yuna is doing well, said Point Defiance Zoo & Aquarium Head Veterinarian Karen Wolf. The calf’s father is 5–year-old Baku.

“We’re thrilled to welcome this calf into our Point Defiance Zoo & Aquarium animal family,” said Aaron Pointer, president of the Metro Parks Tacoma Board of Commissioners. “This little one is another wonderful example of the zoo’s commitment to the conservation of endangered species.”

The calf will remain in a behind-the-scenes bedroom in the Asian Forest Sanctuary area of the zoo while he nurses and bonds with his mother. They’ll go into one of the habitats viewable by zoo guests once the calf consistently follows Yuna around and is able to maneuver on uneven terrain, zoo Land Animal Curator Natalie Davis said.

“It’s too early to say how long that will be,” she added. 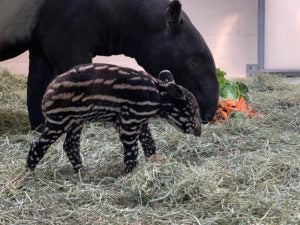 Veterinarians and keepers are closely monitoring the newborn’s progress and assessing how well the first-time mother and her calf are doing.

“We’re excited to watch this calf bond with his mother and watch him grow,” said Senior Staff Biologist Telena Welsh, one of many zookeepers who care for the animals that live in the Asian Forest Sanctuary. “This is a milestone event for Point Defiance Zoo & Aquarium. We are pleased that we’re able to watch over Yuna and Baku as they added one more animal to the world population of endangered Malayan tapirs.” 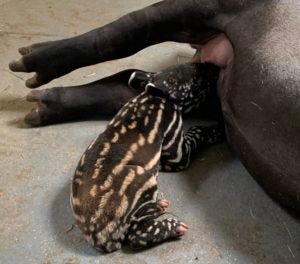 It could take some time for the announcement of a name for the tapir offspring. Zookeepers will develop prospective names within the next few weeks and allow the community to vote for their favorite.

Baku came to Point Defiance Zoo in August 2015 from Denver Zoo; Yuna arrived about a year later from Africam Safari in Mexico. Though they lived next to each other for quite some time, the two were not introduced for breeding until spring 2018. The gestation period for a tapir is about 13 months.

Though this is the first tapir birth at the zoo, Point Defiance Zoo & Aquarium staff have expertise in caring for tapirs. Tapirs have lived in the zoo’s Asian Forest Sanctuary for most of the 15 years since it opened. 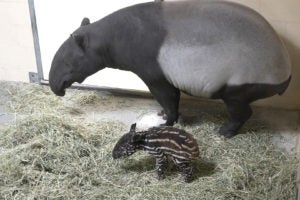 First impressions of the calf might be, well, a bit comical. Some people may want to ask, “Is it a brown, striped and spotted watermelon? An unidentified member of the squash family? An interesting living art piece?” Scientists believe the markings of a newborn tapir help camouflage it from predators. By the time it’s a year or so old, it will look like a smaller black-and-white version of its parents.

The species is listed as endangered by the International Union for Conservation of Nature. Only an estimated 2,500 remain scattered in Thailand, Malaysia and on the Indonesian island of Sumatra.

“Nothing in our mission to practice and promote effective conservation on behalf of the world’s wildlife is more important than the births we’ve witnessed at the zoo this spring and summer,” said Alan Varsik, director of Zoological & Environmental Education for Metro Parks Tacoma.

“Our participation in Species Survival Plans® is crucial to maintaining populations of endangered species like Malayan tapirs and American red wolves. We hope that when our guests see these animals at the zoo, they will connect with them in ways that inspire action on behalf of the world’s endangered wildlife.”

And, of course, added Welsh, “We expect that after seeing a baby tapir, our guests will go home with a new appreciation for this amazing animal – and with huge smiles on their faces. He is too adorable for words.”

For more information about Malayan tapirs, go to www.pdza.org/tapir.

Point Defiance Zoo & Aquarium, the Northwest’s only combined zoo and aquarium, practices and promotes responsible stewardship of the world’s resources. A member of the Metro Parks Tacoma family, the zoo creates a legacy of sustainability for future generations through education, conservation, research and recreational opportunities; it also embodies Metro Parks’ mission of creating healthy opportunities to play, learn and grow. The zoo is accredited by the Association of Zoos & Aquariums (AZA) and the Alliance of Marine Mammal Parks and Aquariums (AMMPA). The Zoo Society, a 501(c)(3) organization, is an instrumental partner in the conservation, animal-welfare and education initiatives.

Back to Newsroom Malayan Tapirs