After 10 months of whistling, bellowing and mating, Dozer will leave the Zoo next month.

Tacoma, Wash. – Dozer, the lovable, 3,078-pound walrus with the 17-inch-long tusks and unmistakable whistle, is leaving Point Defiance Zoo & Aquarium next month. But visitors still have opportunities to see the massive mammal and bid him adieu before his departure.

He’s scheduled to be featured during the marine mammal keeper talks at 3 p.m. on September 15 and 16, his final weekend in Tacoma.

The popular walrus arrived last November through the Walrus Conservation Consortium, which is dedicated to aiding the imperiled species both in aquariums and in the Arctic. 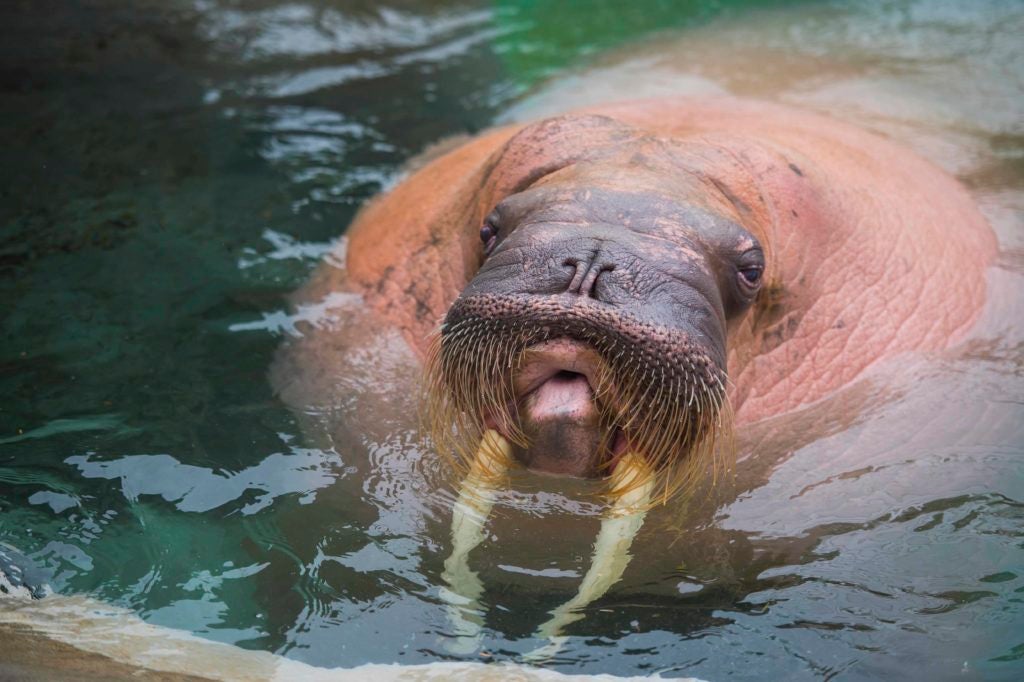 He does love his food: In February, he bulked up to around 3,822 pounds.

Mostly, his diet consists of herring, capelin, clam and squid.

He is a crowd favorite, and he completed his assigned task: While in Tacoma, Dozer bred with the zoo’s three females, Joan, Basilla and Kulu.

Zoo officials won’t know until fall, however, whether the pairings were successful. Once an egg is fertilized, it’s not implanted in the uterus for four to five months – a relatively unique process called delayed implantation. The gestation period is about 15 months.

“We brought Dozer to Point Defiance Zoo & Aquarium in the hope that he and at least one of our female walruses might successfully produce a calf,” said senior staff biologist Lisa Triggs, who has worked with and studied the species for a quarter century. She also earned her master’s degree with scientific research on walrus reproduction.

“There are just 14 Pacific walruses in accredited zoos and aquariums in the United States,” she said. “We are hopeful that we can increase that number. These animals are amazing ambassadors that help our visitors learn about the effects of climate change on marine mammals. They inspire us all to take actions to lower our carbon footprints – like not idling cars.”

During winter and early spring, Dozer’s whistle became an unmistakable call around the zoo. Male walruses have a number of interesting vocalizations, including bellowing and clacking to signal their desire for mating, give warnings or make other needs known in the wild. But the whistle is what impresses the ladies. And Dozer, in the height of rut, or mating, season made it well known that he was trying to attract the females.

Point Defiance Zoo & Aquarium is a recognized leader in walrus research and conservation.

“Each of these studies helps marine mammal experts and other researchers better understand these magnificent mammals,” Triggs said. “The more we learn about them, the more we can help wild walruses as they adapt to changing climates and altered landscapes.”

Point Defiance Zoo & Aquarium, the Northwest’s only combined zoo and aquarium, practices and promotes responsible stewardship of the world’s resources through education, conservation, research and recreational opportunities. The zoo, a division of Metro Parks Tacoma, is accredited by the Association of Zoos & Aquariums (AZA) and the Alliance of Marine Mammal Parks and Aquariums (AMMPA).