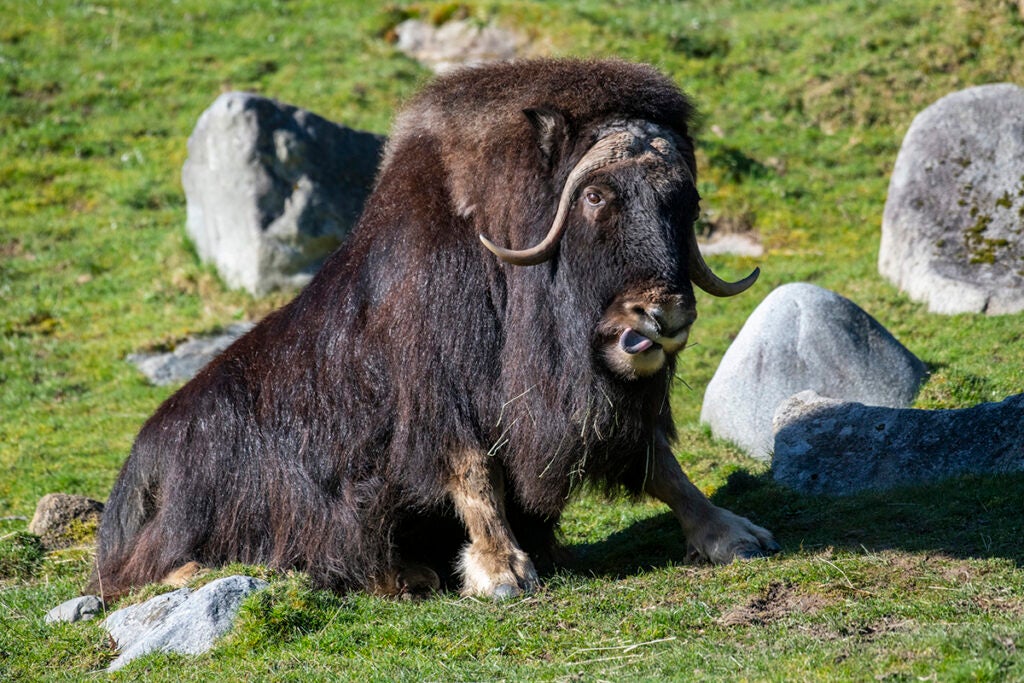 Charlotte and Hudson, two muskoxen at Point Defiance Zoo & Aquarium, are expecting a calf this spring.

The gestation period for muskoxen is between seven and nine months.

Pregnancy tests are much different for animals like muskoxen than they are for humans, said Welsh. While humans pee on a pregnancy test or get an ultrasound, animal care staff collect fecal samples, or poop, to test for hormonal changes.

“Because there isn’t a good blood test to confirm pregnancy in muskoxen and we’re unable to perform an ultrasound on Charlotte, measuring hormones in her poop samples is a great way to non-invasively determine if she’s pregnant and when she conceived,” said Welsh.

If all goes well, the calf should be able to walk and keep up with Charlotte within a few hours of being born. A calf typically weighs 22 to 31 pounds when it’s born and rapidly gains weight. By the time the calf is a year old, it will weigh 150 to 235 pounds. Adult muskoxen can weigh up to 800 pounds.

Muskox wool, known as qiviut, is stronger and warmer than sheep’s wool and the calf will find comfort and warmth huddling up to Charlotte on cooler days.

Six-year-old Hudson arrived at Point Defiance Zoo in July 2016 as a young calf from the Large Animal Research Station at the University of Alaska, Fairbanks. Seven-year-old Charlotte followed a few months later from the Alaska Zoo. They were paired together in hopes they would eventually mate.

The pair gets along well and can be seen in the Arctic Tundra habitat. Keepers also give them time apart to roam their habitat.

Muskoxen were hunted for meat and hides in the 19th and 20th centuries, and their populations plummeted. The Northwest Game Act of 1917 allowed for conservation efforts that helped their recovery, and there are now about 80,000 muskoxen in the wild.

They are native to Arctic prairies and tundra and are commonly found in Greenland, northern Canada and Alaska. These relics of the Ice Age are part of the Bovidae biological family, which includes bison, buffalo, antelope, gazelle, sheep, goats and domestic cattle.

Point Defiance Zoo & Aquarium is one of only two zoos in the United States with muskoxen. Muskoxen have been part of the Tacoma zoo’s animal family for over 40 years.