Bandar likes Kali. Kali likes him but it depends on the day. Indah adores Raja but sometimes he’d just prefer food. Kirana’s not a fan of either guy, but she’ll play along when she wants.

If this sounds like a complicated Tinder triangle (or pentagon) to you, you’re not wrong. Tiger breeding is happening with all five endangered Sumatran tigers at Point Defiance Zoo & Aquarium, and it involves a host of changing factors, from hormones to genetics to behavior, with a good deal of daily preference thrown in. But for curators and keepers, it’s not just matchmaking. It’s a mix of serious science, animal observation and overall care to make sure things go well for both males and females – and of course, the future cubs that are crucial to this species’ survival.

Diving Into the Tiger Gene Pool

The whole thing begins, not with tigers in the flesh, but on paper (or more accurately, a computer). The zoo breeding of endangered species like tigers is a carefully planned coordination to ensure robust genetic diversity within a limited population.

“Think of the tiger population like a big jar of M&Ms,” explains Dr. Karen Goodrowe.

General curator at Point Defiance Zoo, Dr. Goodrowe is also the co-chair for the Sumatran tiger Species Survival Plan® (SSP), a program run by the Association of Zoos & Aquariums in North America to create strong populations of endangered animals in zoos as back-up for their diminishing numbers in the wild. She was also recently appointed coordinator of all three tiger SSP programs, and liaises with global management groups.

“In the jar are hundreds of M&Ms, with many different colors,” continues Dr. Goodrowe. “That’s your gene pool, your variety. Now, imagine you just have a handful over here, and a handful over there and there, separated by roads or villages. Maybe there are only three or four in each group. Suddenly you don’t have so many colors, and they can’t mix. You start to lose colors, lose diversity. In animal populations, that weakens the species as a whole. Their health and reproduction are compromised.”

To make the most of the genes they have, zoos share a list (called a studbook) of all the tigers in human care, along with their genetic make-up. Biologists like Dr. Goodrowe study them and determine which animals would make the best genetic match. Then they take into account each animal’s personality, age, behavior and history, as well as location, and make recommendations for moving animals to different zoos for breeding.

The recent arrivals of Raja and Indah to Point Defiance Zoo are a part of that big plan. All five Tacoma tigers – males Raja and Bandar, females Kali, Kirana and Indah – have strong genes that pair equally well, says Dr. Goodrowe, which makes one part of the matchmaking task a little easier. 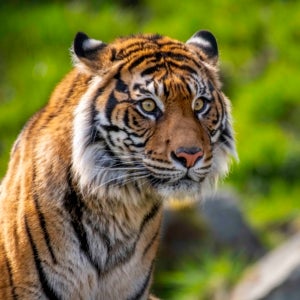 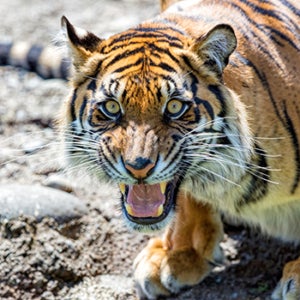 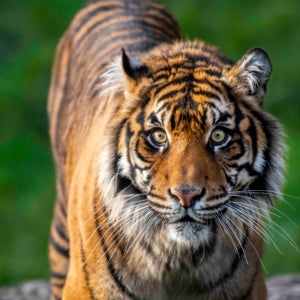 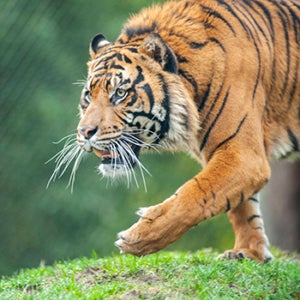 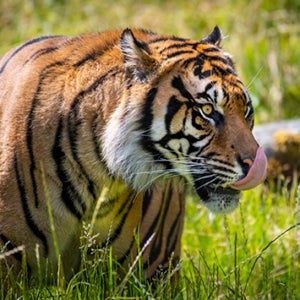 The next part is a little – well – messier. As with all mammals, female tigers need to be in estrus (heat) to breed and become pregnant, and predicting that part of their cycle requires observation, analysis and teamwork. First, the hormones of all three females are tracked via their poop: Each tiger has a different edible marker added to her daily meat diet which will show up at the other end. For Kali it’s sesame seeds, for Indah it’s cracked corn, and Kirana gets green food dye.

As keepers scoop poop daily, they take samples, store them in date-labeled test tubes in a freezer, then send several months’ worth at a time to be analyzed at a lab.

(The Zoo’s male tigers are also checked for sperm counts if they are anesthetized for another veterinary procedure.)

“We’re about to send Indah’s off for the first time since she arrived,” explains Telena Welsh, curator of Asian animals. “We’re excited to see any patterns that emerge.”

Meanwhile, Welsh and her team keep a daily watch on the tiger girls’ behavior, noting everything down in a shared computer spreadsheet arranged by tiger and date.

“Kirana: rubbing head on wall, chuffing at Bandar,” reads one note. “Kali: Distracted. Wide eyes,” reads another. Taken together, they show more patterns: who’s in estrus and for how long, who prefers whom. In particular, keepers are looking for signs that tigers are attracted to and comfortable with each other: rubbing heads on nearby surfaces, rolling on the ground, ‘chuffing’ (a kind of exhaling purr, like a horse blowing air) are all signs of attraction. Growls, hisses, flattened-down ears and swatting are not.

The next step is “introducing” the tigers so they have visual and smell access, while still being physically separated by a mesh door (a process called a ‘howdy’). In tigers, mating attraction can quickly switch to aggression, so this step is extremely important to get a male and female used to each other without actual contact. (A first date, maybe, in human terms.)

“Tigers are a naturally solitary species,” explains Welsh. “Here at the Zoo we keep them separate, as is their preference. In the wild, their hormonal signature would be left through urine marking. So at the Zoo we take these extra steps, just to be safe.”

Today, Kirana and Raja are getting that howdy. They’ve had several over the last few months, and seem comfortable with each other – but there’s a little lack of, let’s say, passion. Kirana notices Raja, but is distracted by her rival Indah just across the corridor, and gives her a lowering stare followed by a tiny growl. Indah, meanwhile, is mooning after Raja, chuffing and rubbing against the walls of her inside bedroom.

And Raja? This handsome, muscular young male is far more interested in licking up some leftover food off the floor. Finishing it, he stretches luxuriously, pads up the ramp to investigate what’s going on outside, then wanders back in for a drink of water.

Kirana takes the opportunity and rubs her head over the mesh door. Raja passes briefly by, then gets back to licking up leftovers.

Is this typical guy behavior?

“Our tigers all seem pretty chill about meeting each other, which is a good thing,” says keeper Chrissy, who has worked with Amur tigers in other zoos who were far more aggressive.

But obviously, you need a bit more than casual interest to make a baby – or a tiger cub. At the right moment, when a female is in estrus and seems interested in the male, Welsh, Dr. Goodrowe and the keepers will arrange a physical session. It happens inside, for everyone’s safety: Each tiger has their own room, with a door to access outside. A keeper is stationed on each of those doors, ready to close if necessary. Finally, the mesh door between the rooms is opened.

Everyone watches closely, standing ready to separate the tigers if there’s any signs of aggression that go beyond the expected play-fighting, rearing back and neck-grasping. Jetting a hose, spraying an airhorn or making noise can all work to startle a tiger back into their own space and allow keepers to swiftly close off the doors.

If things go well, though, the process is repeated many more times – between 15 and 20 – while the female is still in estrus (female tigers are induced ovulators, so conception takes several, um, interactions to be successful).

So far the sessions have been uneventful. In fact, with tigers so inexperienced, it’s maybe been a bit too uneventful, says Welsh. But all things come in time, and the Asia team is hopeful that soon they’ll see signs of a pregnant tiger – and eventually a litter of cubs.

Point Defiance Zoo has seen Sumatran tiger cubs before, most recently in 2014. To have another litter would be another triumph in helping preserve this endangered species, which has only around 400 animals left in the wild.

It’s a process that takes a lot of time, and is fraught with challenges and even danger – unlike, say, breeding Asian otters, a pair of whom just arrived at the Zoo and who are already inseparable day and night. Other steps are more complicated as well, such as training female tigers to voluntarily participate in future ultrasounds and blood tests during pregnancy.

But it’s worth it.

“There are just so few Sumatran tigers left on this planet,” sums up Dr. Goodrowe. “We need to do all we can to help them survive.” 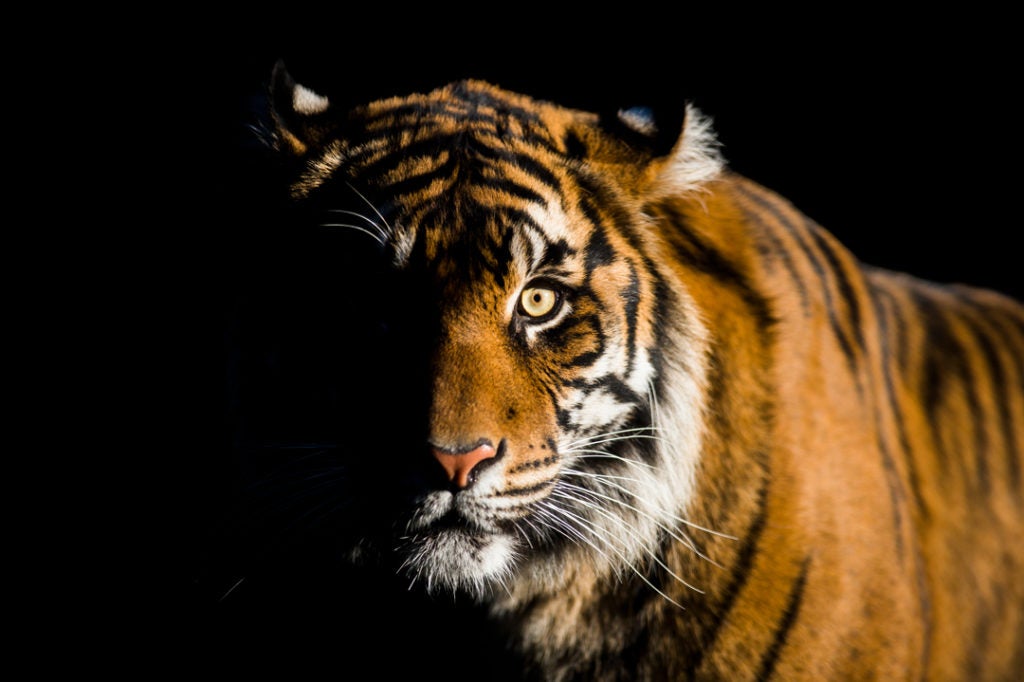