Tiny Magellanic penguin chicks pip out of their eggs, watched by parents Yellow and Orange.

Peck. Peck. Peck. A tiny beak hammers away from the inside of an egg shell, cracks growing slowly at first and then spreading quickly as more progress is made. Faint peeps are heard, then grow louder.

Two rare Magellanic penguins pipped their way out of their shells on May 25 and 27 at Point Defiance Zoo & Aquarium, increasing the penguin colony by just a couple, but upping the adorable quotient by about a zillion, give or take.

The newly hatched chicks are the offspring of mother “Yellow” and father “Orange.”

The zoo’s penguins are not officially named but rather known by the color of the identification bands on their wings. Parents incubate the eggs in shifts. They generally hatch between 38 and 42 days after they’re laid.

This is the third consecutive year for the hatching of penguin chicks through the zoo’s participation in the Association of Zoos’ & Aquariums’ Species Survival Plan® (SSP) managed breeding program for Magellanic penguins. Orange and Yellow were parents to two chicks last year.

“Yellow and Orange are very attentive parents,” said senior staff biologist Amanda Shaffer, the zoo’s lead penguin keeper. “The parents take turns brooding the chicks, keeping them warm with special patches on their abdomens that allow the chicks contact with their skin.”

On Wednesday, dad Orange calmly sat inside the rock burrow on the two chicks. Mom Yellow stood patiently outside, occasionally lifting her wings as if to stave off possible predators. This level of protectiveness means it could be some time before zoo visitors are able to see the
chicks.

They’ll be hidden much of the time over the next few weeks, keeping warm and safe beneath their parent. They will periodically emerge for feedings, which are accomplished when the parents regurgitate bits of the herring and capelin they’ve already eaten; it’s a protein-filled slurry for the hungry little mouths. 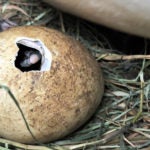 The zoo’s veterinary team plans to give the little birds their first well-penguin checkups on Friday morning.

The colony at the zoo’s Penguin Point now stands at 15 penguins.

Magellanic penguins, native to the South American shores of Argentina, Chile, Uruguay and Brazil, are listed as near-threatened on the IUCN Red List, which the International Union for Conservation of Nature compiles to indicate the status of various species whose numbers are drastically dwindling in the wild

Penguins are threatened in the wild by a number of factors, including the proliferation of plastics in the ocean, spills of oil and other hazardous materials, and overfishing

The zoo will celebrate World Ocean Weekend on Saturday and Sunday with a menu of ocean-themed activities that will be both fun and educational for visitors.

Point Defiance Zoo & Aquarium, the Northwest’s only combined zoo and aquarium, practices and promotes responsible stewardship of the world’s resources. A member of the Metro Parks Tacoma family, the zoo creates a legacy of sustainability for future generations through education, conservation, research and recreational opportunities; it also embodies Metro Parks’ mission of creating healthy opportunities to play, learn and grow. The zoo is accredited by the Association of Zoos & Aquariums (AZA) and the Alliance of Marine Mammal Parks and Aquariums (AMMPA). The Zoo Society, a 501(c)(3) organization, is an instrumental partner in the zoo’s conservation, animal-care and education initiatives.